All of us will soon die!

All of us will soon die!
All of us will soon depart from this world.
[Allah ﷻ says] *كُلُّ مَنْ عَلَيْهَا فَانٍ*
All that is on it [the earth] will perish. *وَيَبْقَى وَجْهُ رَبِّكَ ذُو الْجَلْـلِ وَالإِكْرَامِ*
And the Face of your Lord the owner of greatness and pride will remain.
Allah ﷻ says *كُلُّ نَفْسٍ ذَائِقَةُ الْمَوْتِ*
Every soul shall taste death.
*وَإِنَّمَا تُوَفَّوْنَ أُجُورَكُمْ يَوْمَ الْقِيَامَةِ ۖ
* And only on the Day of Resurrection shall you be paid your wages in full._

*فَمَنْ زُحْزِحَ عَنِ النَّارِ وَأُدْخِلَ الْجَنَّةَ فَقَدْ فَازَ ۗ*
And whoever is moved away from the Fire and admitted to Paradise, he indeed is successful.
*وَمَا الْحَيَاةُ الدُّنْيَا إِلَّا مَتَاعُ الْغُرُورِ*
The life of this world is only the enjoyment of deception.
Ibn Kathir رحمه الله writes:
Therefore, Allah Alone is the Ever-Living Who never dies, while the Jinn, mankind and angels, including those who carry Allah’s Throne, shall die. The Irresistible One and Only, will alone remain for ever and ever, remaining Last, as He was the First. Just a thought; Regarding the second Ayah, Allah ﷻ starts it by mentioning death, and then ends it with the reminder of how short the Dunya is. But the one who enters Jannah and is saved from Hellfire.
That is the ultimate victory. Because no matter how many millions you have, how many cars or women.
*كل من عليها فان*
All that is on it [the earth] shall perish.
As Muhammad ﷺ said _
“(By Allah! This life, compared to the Hereafter, is just as insignificant as when one of you dips his finger in the sea; let him contemplate what his finger will come back with.” Rather the true success lies with the avoidance of the fire, and entrance into Jannah!

Think about these Ayaat!
This is the comparison, and the stark reality! This Dunya is a piece of snow, melting in your hand as you try and keep hold of it, While the shining jewel you have neglected; the Akhirah, that doesn’t perish, is waiting for you to just grab it with both hands!

By Allah! The Dunya is so short, that merely waiting for Qiyamah to start, on Hashr, the people will lament at how the Dunya felt like a morning!

Tags: all of us, all of us will soon depart, dead, death, die, grave, happy ending, kalimah 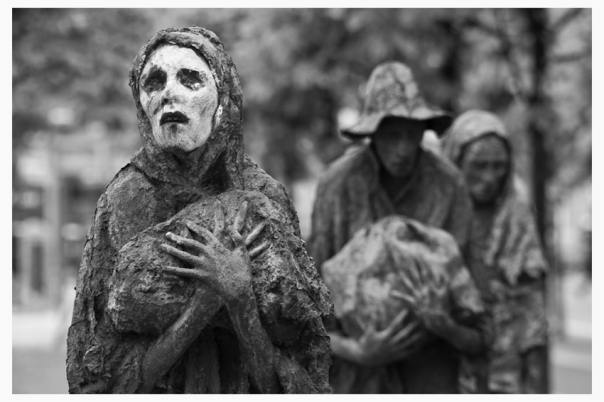 Ireland was ridden with famine and disease between 1845 and 1849. Also known as the Great Hunger, this famine had lasting effects: at least one million people died due to famine-related diseases and more than one million Irish fled, mainly to the United States, England, Canada, and Australia. END_OF_DOCUMENT_TOKEN_TO_BE_REPLACED

Concept of ‘Life of this world’ & ‘Life Hereafter’ in Quran & Sunnah

Life goes like a flash, and everyday we are getting closer to the ‘Day’ , like it or not.. #Prepare #Reflect.

Count yourself before facing Allah swt, count your good deeds and the bad ones…

Almighty Allah bestowed the human beings with a lot of Blessings, gifts, skills etc and bestowed him the title “Ashraf al-Makhlukat” (The Supreme Creature or the crown of the creations). Allah revealed His last revelation (holy Quran) to Prophet Muhammad (SAW), the ‘Seal’ of the prophets. Holy Quran is a comprehensive, authentic and complete book guiding man in every aspect of life, writes TAUSEEF PARRAY

END_OF_DOCUMENT_TOKEN_TO_BE_REPLACED

Is there any special virtue in dying and being buried in Makkah or Madinah?

Praise be to Allaah.

The fuqaha’ are unanimously agreed that it is mustahabb to bury the deceased in the graveyard of the righteous and in virtuous places. They quote a great deal of evidence for that, including the following:

It was narrated that Ibn ‘Umar (may Allah be pleased with him) said: The Messenger of Allah (blessings and peace of Allah be upon him) said: “Whoever can manage to die in Madinah, let him die there, for I will intercede for whoever dies there.”

Ibn al-Haaj said: It seems that whoever dies elsewhere then is transported and buried there will have a share of this intercession, but I did not see any shar‘i text (to that effect).

It was narrated that ‘Umar (may Allah be pleased with him) said:

“O Allah, grant me martyrdom for Your sake and make my death in the land of Your Messenger (blessings and peace of Allah be upon him).”

Imam al-Nawawi (may Allah have mercy on him) commented on this by saying:

It is mustahabb to seek to die in a virtuous land. End quote

In fact, he included it in a chapter entitled: Chapter on the recommendation for a person to pray that his death will be in the virtuous land. End quote.

Imam Maalik narrated in al-Muwatta’ (2/325) from more than one of those whom he trusted that Sa‘d ibn Abi Waqqaas and Sa‘eed ibn Zayd ibn ‘Amr ibn Nufayl died in al-‘Aqeeq and were carried to Madinah and buried there.

Ibn ‘Abd al-Barr (may Allah have mercy on him) said:

The report to that effect from Sa‘d and Sa‘eed, as was narrated by Maalik, is saheeh. End quote.

Al-Haafiz Ibn Hajar (may Allah have mercy on him) said:

There was a difference of opinion as to whether it is permissible to transport the deceased from one land to another.

It was said that it is makrooh, because it involves delaying the burial and exposing him to transgression of his sanctity.

And it was said that it is mustahabb.

It is not allowed if there is no clear purpose, such as burying him in good places. The ruling on it being makrooh varies, and it may reach the level of being haraam.

With regard to the ruling on transporting the deceased from one country to another, this has been discussed previously in the answer to question no. 8852.

Tags: burial, death, Is there any special virtue in dying and being buried in Makkah or Madinah?, Islam, Muslims