← Ramadan’s First Night: Open the Gates of Blessings
THE LAST SERMON OF THE PROPHET MUHAMMAD PBUH → 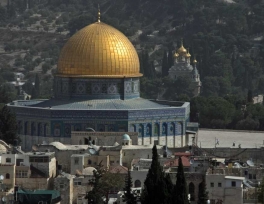 One of the sacred and close to the heart of every Muslim believer day, the date of the Holy Night Isra’ and Mi`raj this year falls on the night of 13 to 14 April.
Isra is a night journey of the Prophet ﷺ from the al-Haram Meccan mosque to the al-Aqsa mosque in al-Quds (Jerusalem). Mi’raj is the ascension of the Messenger ﷺ to heaven and the attainment of that place, of which there is no knowledge either of angels, or of jinns, or men.
The greatest lesson and edification in this ascension is the prescription of five daily prayers (namaz). Namaz was prescribed to our Ummah on the night of Mi’raj, when the Prophet ﷺ saw and communicated with Allah Almighty, without intermediaries.
While the Prophet’s ﷺ ascension with body and soul was a miracle, then, verily, Allah has made for the Ummah Muhammad ﷺ a spiritual mi’raj, which occurs five times a day. In namaz, their souls and hearts are lifted up to their Lord, moving away from their passions and lust and witnessing the power and greatness of Allah and His Uniqueness.
The miracle of the night journey and ascension of the Prophet ﷺ in his life is one of the greatest miracles. This happened after the Prophet ﷺ for ten years invited and preached to the Meccans, calling them to Islam, but in return received only ridicule, humiliation and resentment. This event happened some time after the death of Khadija and the Prophet’s ﷺ uncle Abu Talib. All these events followed one another, and this year was called as the “year of sorrow”.
Then the Almighty gave him Mi’raj as a consolation.
On the blessed night of Isra’ and Mi’raj, Muslims repeatedly perform zikr, recount stories from the life of the Prophet ﷺ, recite the Salawat, ask for the forgiveness of sins and make du`a.
Also, one should not forget about helping those in need. Any alms given sincerely from the heart for the sake of seeking the pleasure of Allah will be rewarded abundantly.

← Ramadan’s First Night: Open the Gates of Blessings
THE LAST SERMON OF THE PROPHET MUHAMMAD PBUH →