Dua; the Weapon of the believer

It was narrated that Abu Hurayrah (may Allaah be pleased with him) said: The Messenger of Allaah (S) said: “A man who weeps for fear of Allaah will not enter Hell until the milk goes back into the udder, and dust produced (when fighting) for the sake of Allaah and the smoke of Hell will never coexist.” 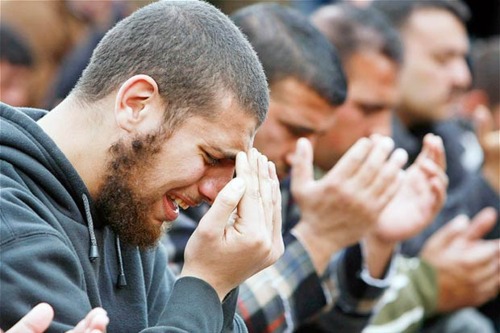 “until the milk goes back into the udder” is a metaphor for it being impossible, as in the verse where Allaah says (interpretation of the meaning): “and they will not enter Paradise until the camel goes through the eye of the needle”

Tags: A Beutiful Hadith, Dua and asking forgiveness from Almighty Allah :)), Islam is the Fastest Growing Religion in the World FOX NEWS REPORT, Learning the Holy Quran, Oneness of ALLAH SWT, Quranic Suplications, The Holy Quran Recitation Surrah Duha By Abdul Basit, The Purpose of life, Virtues of The Jummah, Why we are alive?, ~ Dua Of The Day ~