“Blessed is He in Whose Hand is the dominion, and He is Able to do all things,
Who has created death and life, that He may test you which of you is best in deed, and He is the All-Mighty, the Oft-Forgiving.”
[The Holy Quran, Surrah Al-Mulk 67:1-2]

“Yet they have taken besides Him other gods that created nothing but are themselves created . . .”
[The Noble Quran, Surrah Al-Furqaan 25:3]

Abu Hurayrah (may Allah be pleased with him) said: “The Right Hand of Allaah is full and (its fullness) is not decreased by any spending; it is overflowing by night and day. Think of what He has spent since He created the heavens and the earth, but all this spending had not decreased what is in His Right Hand.” He said: “And his Throne is over the water, and in His other Hand is the power to bring about death, and He raises some people and brings other low.”

Al-Haafiz Ibn Hajar (may Allah have mercy on him) said: In the report of Ishaaq ibn Raahawayh it says “and the Throne is over the water.” The apparent meaning is that it was like that when the Prophet (blessings and peace of Allah be upon him) spoke these words. The apparent meaning of the hadeeth which comes before it is that the Throne was over the water before the creation of the heavens and earth, and the two hadeeth when taken together indicate that it is still over the water. End quote.

Virtues of The Jummah

It was narrated from Aws ibn Aws that the Prophet (peace and blessings of Allaah be upon him) said: “The best of your days is Friday. On that day Adam (peace be upon him) was created; on that day he died; on that day the Trumpet will be blown and on that day all of creation will swoon. So send a great deal of blessings upon me, for your blessings will be shown to me.” They said, “O Messenger of Allaah, how will our blessings upon you be shown to you when you have turned to dust?” He said, “Allaah has forbidden the earth to consume the bodies of the Prophets, peace be upon them.”

It was narrated that Abu Hurayrah (may Allaah be pleased with him) said: The Messenger of Allaah (peace and blessings of Allaah be upon him) said: “The best day on which the sun rises is Friday. On it Adam was created, on it he was admitted to Paradise and on it he was expelled therefrom.”

This hadeeth includes some of the reasons why Friday is regarded as special.

Al-Qaadi ‘Iyaad said: The apparent meaning is that these virtues do not mean that Friday is regarded as special because Adam was expelled on a Friday and the Hour will begin on a Friday. Rather it is meant to explain what momentous events took place and will take place on this day, so that people will make the most of this day to do righteous deeds, so as to attain the mercy of Allaah and ward off His punishment. This is the view of al-Qaadi. 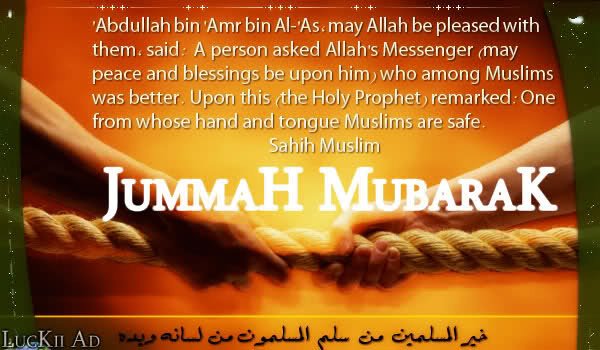 Abu Bakr ibn al-‘Arabi said in his book al-Ahwadhi fi Sharh al-Tirmidhi: All of these events are good and add to the virtue of Friday.  The expulsion of Adam from Paradise is the reason why his offspring and the Messengers, the Prophets, the righteous and the awliya’ exist. He was not expelled from it as such, but rather it was for a purpose, then he will return to it. With regard to the Hour beginning on a Friday, the reason is so that the reward may be hastened for the Prophets, believers in truth, awliya’ and others, and their honour and high status may be made manifest. This hadeeth points to the virtues of Friday and its high status in relation to the other days.

Posted in Fadhilat of Jumu’ah (Friday)