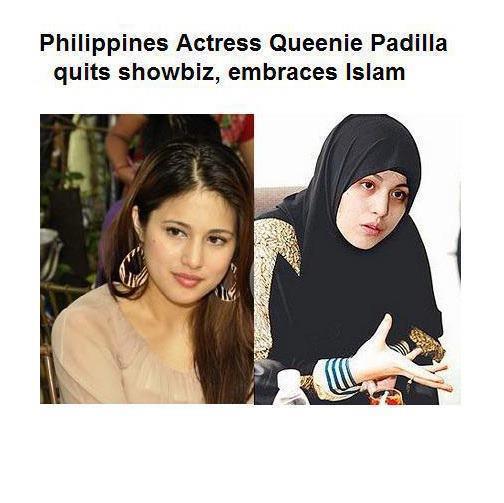 “When I was in showbiz, I was very unhappy. I was lost and I always felt I never belong[ed].
But now that Allah is in my life, Alhamdullilah, La illa illalah, I am so happy and content in my life,” Padilla said.
Queenie recently went to Makkah in Saudi Arabia to perform her religious duty called Hajj.
She added that she found “inner peace” and “direction” by going back to Islam where she also found her happiness.& She said she has become a totally different person because of Islam. “Islam is a way of life. When you start to [become a] Muslim, you know [what] your life purpose really is.
I am such a sinful person, but Allah invited me to his house. I am so close to him,” she said.
Padilla thanked her father, action star Robin Padilla, who introduced her to Islam.“I just want to thank my father for giving me the opportunity to perform Hajj.
And I love him so much because without my father, I might not have been a Muslim,” she said.
Even Padilla’s relatives and friends in Saudi Arabia were inspired by her new image. As she returns to the country, Padilla said she will carry with her the experiences she had while doing Hajj, adding that she will share these to her fellow Filipinos

Posted on February 2, 2012, in Revert Stories. Bookmark the permalink. 11 Comments.